On October 1, 2010, the Weeneebayko Health Ahtuskaywin integrated with the James Bay General Hospital to become the Weeneebayko Area Health Authority (WAHA) — a public hospital, under the Public Hospitals Act, in the Province of Ontario.

History of hospital in Moose Factory

In 1950, the Moose Factory Indian and Inuit Hospital was constructed as a tuberculosis facility, funded with federal government dollars and built in the shape of the Cross of Lorraine. It was a 200-bed facility treating patients from as far away as the Northwest Territories and providing hospital services to the east and west coasts of the James and Hudson Bays. Over the years, the treatment of tuberculosis took on a different treatment plan and hospitals such as this were no longer required.

In 1966, to better reflect evolving times, the name of the hospital was changed to the Moose Factory General Hospital (MFGH). MFGH then became the regional facility providing hospital services to the communities of western James Bay. In 1996, services were transferred from the federal government under Health Canada to a locally appointed and controlled Board of Directors under the Weeneebayko Health Ahtuskaywin; however, it remained funded by Health Canada with some provincial funding for James Bay Ambulance Services, Weeneebayko Diabetes Health Education Program, Dental Services and the Community Mental Health Program.

James Bay General Hospital was formed in 1969 from hospitals built and funded by the Roman Catholic Church in the early 1900s. These hospitals were constructed in Moosonee, Fort Albany and Attawapiskat.  In 1969, a fire at the Assumption (Moosonee) Hospital demolished the facility and during that time, the Roman Catholic Church, and the Province of Ontario, began working on the transfer of land and health services to Ontario.   Subsequent to this transfer, new facilities were built in Attawapiskat (1985), Fort Albany (1987) and Moosonee (1993) under the Province of Ontario. 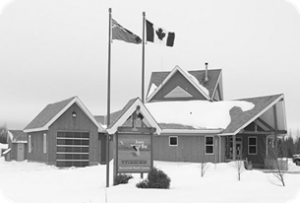 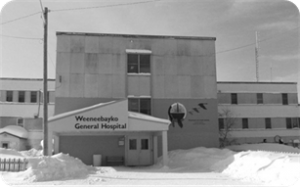 The Weeneebayko General Hospital (WGH), a 37-bed facility is located on Moose Factory Island and provides regional medical coverage to the James and Hudson Bay communities. WGH provides acute (temporary) and alternate levels of care as well as 24 hour emergency services; family medicine and coastal outreach. Medical emergencies are transferred to Timmins and District Hospital or Kingston General Hospital.  The Weeneebayko region has a long standing history with Queen’s University/Kingston General Hospital, with residencies for medical students and other health care professionals, that continues to this very day.

Additional services offered at WGH include:

The Fort Albany Hospital, a 17 inpatient bed facility, provides access to 24/7 care. Registered Nurses are available for emergency room services and they have access to physicians for consults. Medical emergencies are transferred to WGH, Timmins and District Hospital or Kingston General Hospital. 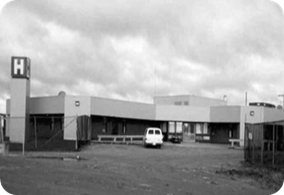 The Attawapiskat Hospital, a 15 inpatient bed facility, provides access to 24/7 care. Registered Nurses are available for emergency room services and they are able to contact physicians for consults. Medical emergencies are transferred to WGH, Timmins and District Hospital or Kingston General Hospital. 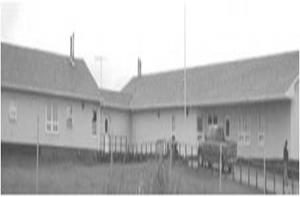 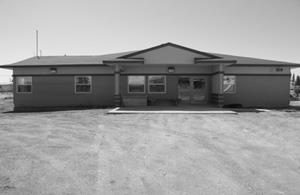 The Town of Moosonee lies on the southern border of the James Bay Lowland eco-region with a population of 3,500.  Moosonee came into existence at the turn of the century when, in 1900, Annie Hardisty and her two daughters became the first settlers on the site. The James Bay region is rich in fur trading history; in 1903 Revillon Frères set up their trading post, to compete with their main rival, the Hudson Bay Company, which had already established their trading post on the island of Moose Factory in 1673.

Moosonee operates as a municipality, and it not a first nation, but the majority of its residents are Aboriginal (about 70%) having settled from coastal First Nations of James Bay and Hudson Bay region, i.e. Fort Albany, Kashechewan, Attawapiskat, Peawanuck and Moose Factory.

Moose Factory is an island situated across from the mainland of Moosonee with a population of 3,153. Moose Factory is accessible by boat and barge in the summer, a temporary ice road in the winter and by helicopter during the break-up and freeze-up periods. All other methods of transportation are located in the Town of Moosonee (train station and airport). During the winter months, there is a road (Wetum Road) connecting Moose Factory to Smooth Rock Falls, Ontario.

Established in 1679, Fort Albany First Nation is located on the southern shore of the Albany River with a population of 946.  Fort Albany is located 164 kilometres from Moosonee and is accessible by air, winter road or through the waters of James Bay and the Albany River.  Along with Rupert House and Moose Factory, Fort Albany was one of the oldest and most important Hudson’s Bay Company posts.

Attawapiskat First Nation has a population of 1,884 and is located at the mouth of the Attawapiskat River, 269 kilometres from Moosonee.  Attawapiskat is accessible only by air during the spring to fall months and by winter road.  Traditional harvesting continues to play an integral role for local people who regularly hunt caribou, goose, and fish along the Attawapiskat River, while tending trap lines throughout the region.

Peawanuck is located 523 kilometers north of Moosonee and has a population of 268; it is the most northernly community serviced by Weeneebayko Area Health Authority.  Peawanuck was originally known as Weenusk.  In 1986, there was a major flood causing the community of Weenusk to re-locate and be rebuilt up river on higher ground. A new Health Centre was constructed at that time. The new settlement was renamed Peawanuck, meaning ” in the Cree language.  Major access to the community is via plane.  In the winter months individuals can travel on an ice road to Fort Severn First Nation, Shamattawa or Gilliam Manitoba.

We use cookies on our website to give you the most relevant experience by remembering your preferences and repeat visits. By clicking “Accept All”, you consent to the use of ALL the cookies. However, you may visit "Cookie Settings" to provide a controlled consent.
Cookie SettingsAccept All
Manage consent

This website uses cookies to improve your experience while you navigate through the website. Out of these, the cookies that are categorized as necessary are stored on your browser as they are essential for the working of basic functionalities of the website. We also use third-party cookies that help us analyze and understand how you use this website. These cookies will be stored in your browser only with your consent. You also have the option to opt-out of these cookies. But opting out of some of these cookies may affect your browsing experience.
Necessary Always Enabled
Necessary cookies are absolutely essential for the website to function properly. These cookies ensure basic functionalities and security features of the website, anonymously.
Functional
Functional cookies help to perform certain functionalities like sharing the content of the website on social media platforms, collect feedbacks, and other third-party features.
Performance
Performance cookies are used to understand and analyze the key performance indexes of the website which helps in delivering a better user experience for the visitors.
Analytics
Analytical cookies are used to understand how visitors interact with the website. These cookies help provide information on metrics the number of visitors, bounce rate, traffic source, etc.
Advertisement
Advertisement cookies are used to provide visitors with relevant ads and marketing campaigns. These cookies track visitors across websites and collect information to provide customized ads.
Others
Other uncategorized cookies are those that are being analyzed and have not been classified into a category as yet.
SAVE & ACCEPT